Ailsa at wheresmyback posted her Travel theme this week: Art.  Since I’ve just returned from vacation, and before that been at my mom’s for a few weeks, I am just buried with things to do. So, I will take the easy way out this week, and present my most obvious response to this challenge.

Two summers ago, while we were in London, we made a day trip to Paris, which included a trip to the Louvre.  I had been to Paris before, but the Louvre and several other places we had hoped to visit were closed by a museum-workers strike – VERY disappointing.  This time, we made it, so I can share a few snaps of some of the most famous items we saw there:

The most famous masterpiece in Musee du Louvre is probably La Gioconda, better known as the Mona Lisa.

She is actually not a large painting, but still there is something quietly beautiful about her. My own photo is a little grainy, as flash photos are not allowed, and there was quite a bit of crowd jostling.

You get the idea – we really saw her!

In the surrounding rooms and galleries we were treated to a wonderful selection of classic paintings – the Rape of the Sabine Women, the Wedding Feast at Cana, and many, many others – some we weren’t as familiar with – but which grabbed and amazed us nonetheless. 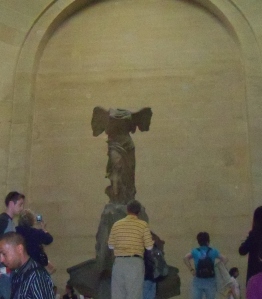 The next striking piece we saw was the Winged Victory of Samothrace. Positioned in a major stairwell (crowded with people), it was tough to do this one credit with a snap as well (but please feel free to use the links to more fully appreciate the beauty of this sculpture.)

Our niece, who was along with us on this trip, was a classics major, so we spent a good part of our time here enjoying the Greek, Etruscan, and Roman antiquities – some truly lovely and fascinating items! 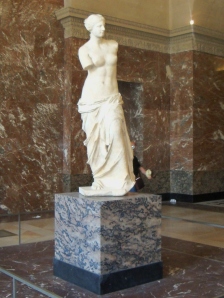 Which brings me to the piece I felt most drawn to. I don’t know whether it was the calmer and more isolated surroundings or whether this is just an incredible piece, which it obviously is, but Aphrodite (the Venus de Milo) just spoke to me.  Everything about it just felt so perfect.

She is pristine and beautifully detailed from every angle.  I could have stayed in this room much longer just watching the light change and the shadows fall a little diffently.

Of course the Louvre itself is a work of art. It started as a Chateau/Palace and has been updated and revised many times since it was originally built in 1190. A history of the building can be found here.

The most famous recent change is probably the 1989 addition of the I.M.Pei’s glass pyramids in and above Cour Napoleon in the museum’s reception area. There has been a lot of controversy about the addition of such a stark modern element to the palace. It is a little jarring outside, but inside, I thought the spill of light and view of the sky and palace above were breathtaking.  You can decide for yourselves…. 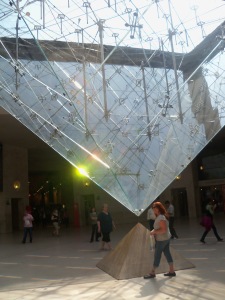 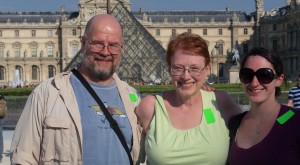 Seeing the Louvre at last was an incredible experience, and we all wished we could have spent much more time there – BUT – we were thrilled to have the opportunity to see some of the other artistry in Paris on our day trip! 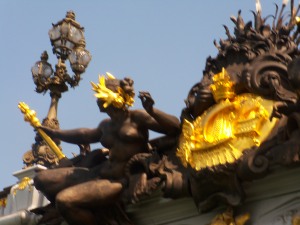 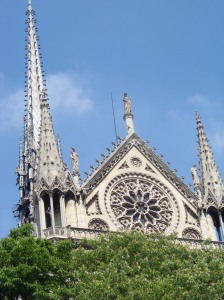 On a brief Seine river cruise, we were dazzled by the detail and craftsmanship in  the bridges, and so many buildings including the Notre Dame Cathedral. 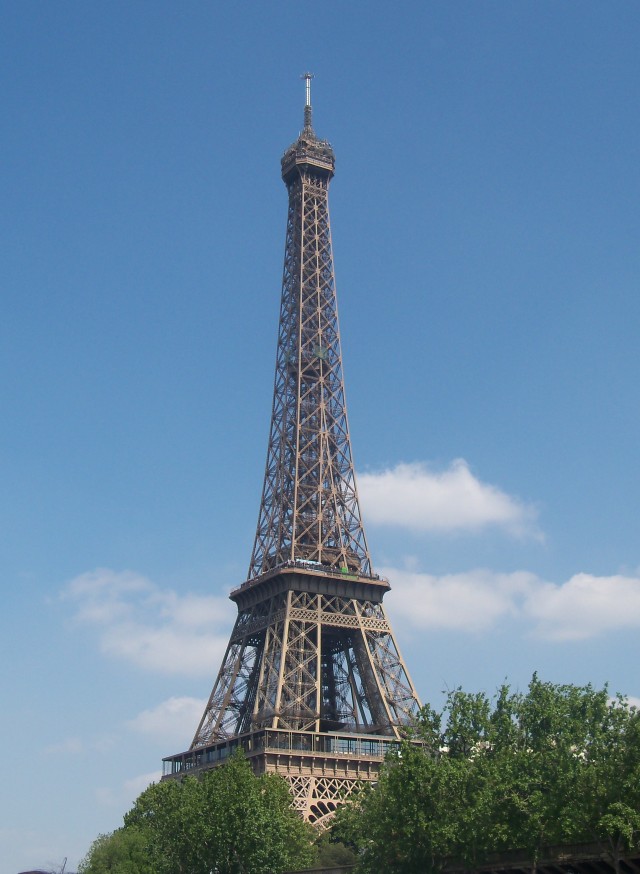 Of course, no trip to Paris would be complete without a visit to the Eiffel Tower – and this trip we were actually able to go up inside for lunch! There is an elegance and artistry to the design (mostly known for its engineering properties), and we opted to take the stairs down from the second level – which I think enhanced our appreciation of the structure. At the end of WWI, my grandfather was briefly able to stay in Europe to study with Eiffel at the Sorbonne.  Although this delayed Grandpa’s wedding to my grandmother a bit, it was a highlight of his life, and both of them mentioned it several times when I was growing up!

That’s the nutshell tour of our day in Paris! To see the art images other bloggers posted, click here.