For forty years, my beloved and I talked about going to Hawaii.  Finally, we were able to go last Fall.  We figured we would treat ourselves to this big vacation while we were both working,

Hawaii is probably one of the most photogenic places we have ever been. We spent the first leg of our trip on Oahu, and saw all the touristy things we’d always heard about. (On the second leg we went to the “big island” and saw a very different place – which is a whole separate post. Here, I’ll focus on our week on Oahu.)

While there, we were total tourists and took full advantage of our splurge.  We stayed in Waikiki, and did both group bus tours and separate day trips in a rental car.  These photos barely scratch the surface of what we saw, but give a sense of the variety of lovely and interesting places packed onto this relatively small island.

One of our first stops was Pearl Harbor.  There are museum displays and outdoor exhibits explaining what happened on the day of the attack.  Undoubtedly for us, the most moving part of the park was the Arizona Memorial, built across the hull of the sunken ship. Alongside, you can see the USS Missouri, where the treaty with the Japanese was signed.

Looking over the side of the memorial at the deck below, you can see droplets of oil that have been gradually seeping up from the ship, called the “tears of the Arizona.”  The legend is that they will stop once the last of the survivors has passed away.  Scientists have estimated that’s likely – the oil will run out in a few years.

We went to the North Shore of Oahu, famous for surfing and the “banzai pipeline.” While there, we briefly stopped at Sunset Beach and watched the surfers for a bit… 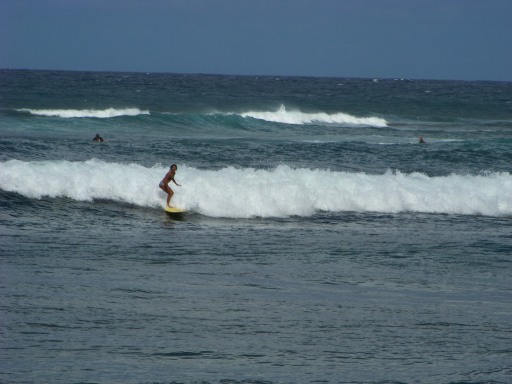 The coast of the island presents some gorgeous spots….

Twice we took the Pali Highway between Honolulu and the opposite coast.  This shot was taken at the approach to the Nu‘uanu Pali Lookout over the Waimea Valley.

We had fabulous views of the beach and Diamond Head from our hotel…. the beach was part of every day while we were there. I have always loved the ocean, and staying right on the water gave us so many opportunities to enjoy the surf.

We spent almost a full day at the Kualoa Ranch, where we saw TV/movie filming sites (Lost, Godzilla, Jurassic Park, etc.), took a jungle ride, and sailed on a catamaran out to “Chinaman’s Hat” island. The views from the hills above the ranch are just spectacular. 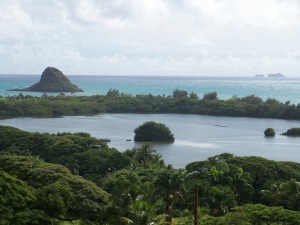 We enjoyed a day driving to all the remaining things we wanted to see, which started at Diamond Head (which we climbed enjoying views of Waikiki and several rainbows), Punchbowl cemetery, a Round Top Drive overlook, and a stop at the Polynesian Cultural Center, which was interesting, but sort of a disappointment – it felt a little Disneylandish to us. 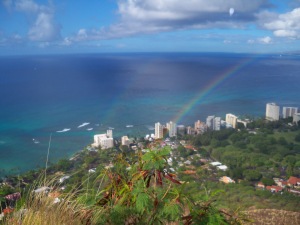 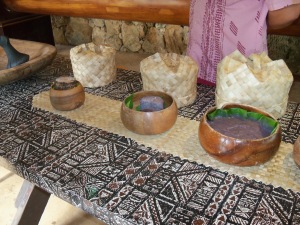 We took in a luau one night, walked the beach from one end of Waikiki to the other, and shopped at the International Market Place and the ABC stores (a chain of cheap little souvenir shops – so fun!)

In Honolulu proper, we took in the Bishop Museum, beautiful Iolani Palace, and the court building across the street from the palace, famous as the home of Hawaii 5-0 on TV.

We were fascinated to learn that there are no predatory animals in Hawaii, other than birds. As a results, chickens brought to the islands by Europeans have flourished in the wild – and we saw them everywhere. Someone also had the brilliant idea of bringing the mongoose over to reduce the population of some snakes (also not indigenous) – and learned once the mongoose population took hold that one species was nocturnal and the other wasn’t – so now both species are still thriving there!

For a glorious week, we toured, relaxed, ate at restaurants overlooking the beach watching the sunsets, and in general we just totally enjoyed being tourists! Traffic is as bad around Honolulu as in any other US city, and it’s not a very economical vacation venue, but Oahu was fabulous fun, and an indulgence we will always remember.

(To see the photos enlarged, click on them or see the slideshow below. A description comes up if you hover your mouse over the photos in the post.)