My (Retired) Life so Far

Well, it’s been six weeks since I bid farewell to my job…  so I’m thinking it’s time to take stock of what I’m doing with myself.

I’ve spent about a third of the time so far visiting with my mom and sister.  That’s been wonderful (and I’m due to go back next week), but not necessarily good for regular sleep patterns!  Along the way I’ve definitely been eating better – but that’s tomorrow’s post!

I have actually accomplished a few things.  I got our taxes filed, and I’ve been working on a full-out retirement living budget for when my beloved also stops working.  That has included some Social Security research, a review of our retirement accounts, and some rethinking about where we’ll end up living.  I’ve got a spreadsheet started, and when I get a little further along that will be a post or two of its own.

I’ve also been working on my photo archiving.  I’m a digital packrat.  Well, actually, I’m just a packrat, but through the wonders of technology, I’m hoping to reduce the amount of paper I own.  A couple of months ago, I purchased two portable hard drives. One I use as a backup of our various devices (desktops, laptops, phones, and Kindle). The other is where I’m collecting all the photos I have on other drives, cameras, cards, disks, and websites.

Websites, you say?  Yep.  I have home movies sitting out on iMemories.com.  They did the conversion to digital and then plopped them out on their site for as long as I need them there – and at this point, as long as I’m willing to pay a small nominal charge to keep them there.  (I’ve been a little slow in figuring out what I want to do with them next.)  I also have a family page on MyFamily.com, to which many aunts, uncles, cousins, etc. belong. 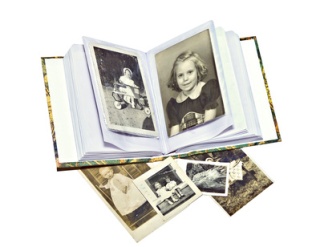 Over the past ten years or so, we have stashed a wealth of family history there in the form of stories, comments, and photos.  I want to back that all up as well.  Ten years ago we did a family history book, but so much has happened since then! Oh, yeah, and there are some great family pictures my daughter posted so I can download them from Facebook.

It’s also my rather ambitious goal to scan in about eighty years worth of paper photos and memorabilia I have acquired from my parents, my father-in-law, and all kinds of other sources.  I am the proud holder of three or four large plastic storage bins (the size my six-year old grandson fits in) full of loose photos, albums, ancestral birth and death certificates, slides, negatives, awards, graduation programs, and – let’s be honest – who knows what else.  The only way to make sense of this stuff is to get it digitized by topic so I can share it in a useful way – CDs and DVDs for now.

But some of that may have to wait until the Fall.  I also have some work to do around my house, and out in my garden.  And, truth be told, I haven’t yet spent any time out on my back deck, or enjoying my front porch.  And the view from that porch is lovely.

9 Responses to My (Retired) Life so Far