Well it’s the middle of the month, and I promised myself I’d post travelogues regularly (I’m thinking monthly). I’m trying to get a little more organized with my blogging.  This time, I’m posting about one of my favorite places.

There isn’t much mystery about why I love Edinburgh.  Like Glasgow, where my grandmother was born, it’s a bustling Scots city, full of history, and south of the highlands. I travelled there with my grandparents as a child.  But it’s more than nostalgia and Scots heritage that attracts me. Edinburgh debunks the idea that people in cooler climates are cold and unwelcoming. It’s a lovely, embracing place with old and new sections. Edinburgh has been the capital of Scotland since the 15th century. And for me, there’s just something about that castle, overlooking the Firth (Bay) of Forth and the city.

Castle Rock has been a fortress since ancient times, and is now the site of the castle. Built over the last thousand years on a volcanic outcropping, Edinburgh Castle gives the city a romantic fairy-tale feeling.  The old town and the Royal Mile sit on one side of the Princes Street Gardens, the new town and Princes Street sit on the other.  The castle sits proudly at the head of the Royal Mile. The Palace of Holyroodhouse, official residence of the queen in Scotland (and not much younger than the castle), sits at the foot. The city spreads out in all four directions.

I’ve been back to Edinburgh a number of times since my childhood, and it never gets old  Most recently, we went back to Britain with our niece.  The trip had a sort of If it’s Tuesday, this must be Belgium feel to it, minus the romantic comedy!  We wanted to see so much, and we crammed in a lot – London, Chunnel trip to Paris, some palaces and Stonehenge, the Highlands, and Edinburgh. 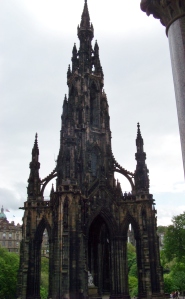 It rained throughout our visit, hence the grey cast to many of the photos. Still, we thoroughly enjoyed our stay. For the first time, we stayed right in the heart of town at the Old Waverley Hotel across the street from the train station and the Sir Walter Scott monument.  A bagpiper in full regalia piped outside the train station every day. We walked in the new town, shopped on Princes Street, and took a bus tour of the city.  We did the Scotch Whisky Experience, learning about Scotch.  We climbed the Scott monument (I went halfway, my niece went to the top.) 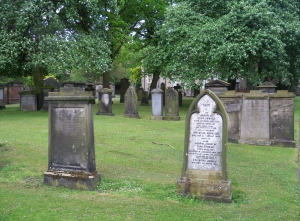 We meandered through the graveyard at St. Cuthbert’s parish. We wandered down the Royal Mile past St. Giles’ Cathedral, a house where Robert Burns stayed, the John Knox House, and Deacon Brodie’s Tavern (Brodie was the inspiration for Dr. Jekyll & Mr. Hyde.) We even had lunch with one of my cousins and her husband. So cool. Holyroodhouse was unfortunately not open to the public while we were there, but we looked in through the gates! 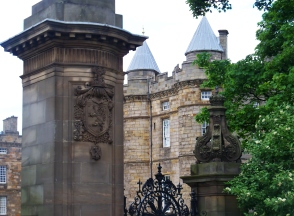 Holyroodhouse through the gates

And, of course, we walked through Edinburgh Castle, which contains so much – St. Margaret’s Chapel (the oldest standing building), the Scottish National War Memorial and National War Museum, the Scottish Crown Jewels, and old palace rooms, including the great hall.  We were there when they shot off the cannon at one o’clock, and watched them setting up stands for the August Military Tattoo (my sister was there for that and the festival, but we were there too early – in May.) 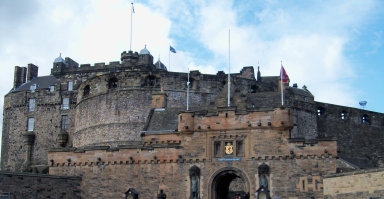 Entrance to the Castle 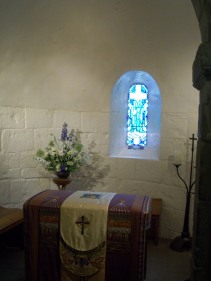 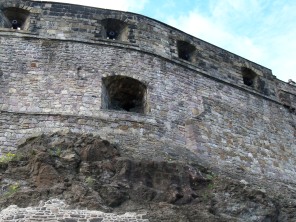 Half Moon Battery, and a view through one of its holes down the Royal Mile – the hills are the Sagamore Crags and Arthur’s Seat in Holyrood Park.  The blue seating stands for the Tattoo are on the left. 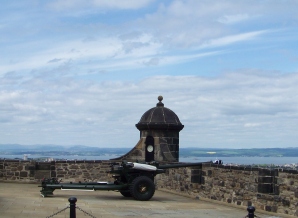 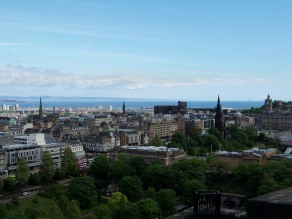 The castle cannon fired at 1 pm every day and the view North to the Firth. 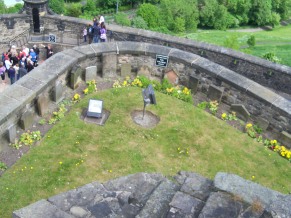 A zoomed view of Calton Hill and its monuments from the castle, with Waverley Station in the foreground.   The castle cemetery for soldiers’ dogs – like the English, Scots love their pets!

I’ll finish up with a few random shots taken around the city. including the monument to Greyfriar’s Bobby (legendary loyal pooch and the subject of an old Disney movie), and a final one of me, enjoying the view! 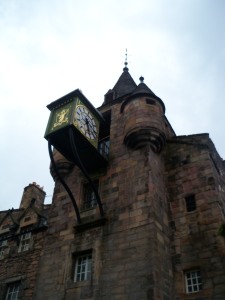 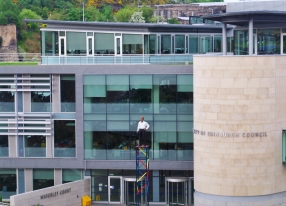