The weekly Travel Theme from Ailsa at Wheresmybackpack? is Tradition.  I’m a little late with my response this week, but since I’m as much a sucker for traditions as anyone, here goes… 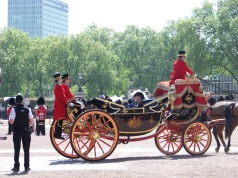 We tend to think of traditions as something that can’t be broken – or that have gone on forever. I was struck during the recent Diamond Julilee for the UK’s Queen Elizabeth II, by how many things I thought were “forever” traditions started with Elizabeth, Edward, or Victoria in the last 100 or so years.

Sometimes we assign the word “traditional” to something as if that attaches some mystical unbreakable charm to the event or item, but actually, in our normal anthropological evolution, some traditions necessarily fade and others spring up on a regular basis. Sometimes we cling to them too long, and sometimes we discard them too easily.

Some common US traditions that come quickly to mind…. 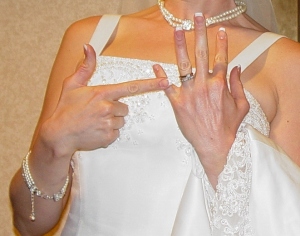 1) Wedding traditions – Wedding rings date back to ancient Roman times or earlier. The pale ivory or white wedding dress was sometimes worn earlier, but it became the standard  after Queen Victoria’s 1842 wedding. Although diamonds had been used in wedding bands before that, diamond engagement rings became popular in the 1920’s, and became a must-have when DeBeer’s advertised that “A diamond is forever” in the 1950’s.

2) Christmas traditions – Christmas trees (Prince Albert brought the tradition to England in the mid-nineteenth century from Germany) are a big one. The current story of Santa Claus flying with his reindeer, coming down the chimney to fill stockings and leave gifts arrived with C. Clement Moore’s 1823 poem, A Visit from St. Nicholas (‘Twas the night before Christmas…) I’m not sure when authors and cartoonists decided that Santa was a first name rather than the honorific for a saint, and that Claus was a surname rather than a given name, but that always gets me – it’s a growing tradition I’m not fond of! In our family, we also like to go to Christmas Eve music services, and we always make way too much shortbread at Christmas. 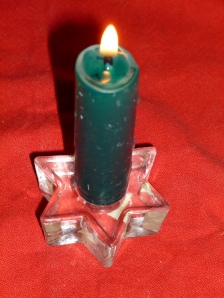 3) New Year traditions – We sing Auld Lang Syne as the year turns. The old Scots tune with words of Robert Burns was popularized in the US by Guy Lombardo and the Royal Canadians, who performed it at New Year parties in New York starting in the 1920’s. Those performances were on radio, and later TV. Another tradition we follow in our family, on both Christmas and New Year’s Eve, is burning bayberry candles down to the nub for luck in the coming year.

This bayberry candle comes from a friend
so on Christmas (or New Years’s) eve burn it down to the end.
For a bayberry candle burned to the socket,
will bring joy to the heart and gold to the pocket.

4) Soup Day traditions – What, you don’t celebrate Soup Day? You’ve never heard of Soup Day? Well, you don’t know what you’re missing.  This is our very own tradition, invented by my beloved. Each October, we pick a weekend, and our kids, siblings, nieces and nephews are invited to bring their favorite soups to our place. We enjoy a weekend of comfort food (and family camped out in every room of our house.)  We’ve even designed special plates that carry 4 bowls of soup at a time. We’ve been doing this for quite a few years now, and the kids really count on it, so it definitely qualifies as a tradition. Still, in a few years it will get harder to get kids and grandkids together, and we will be downsizing our home, so Soup Day will have to move/evolve, or go the way of wedding rings worn on the index finger!

Leave a Reply to The Retiring Sort Cancel reply